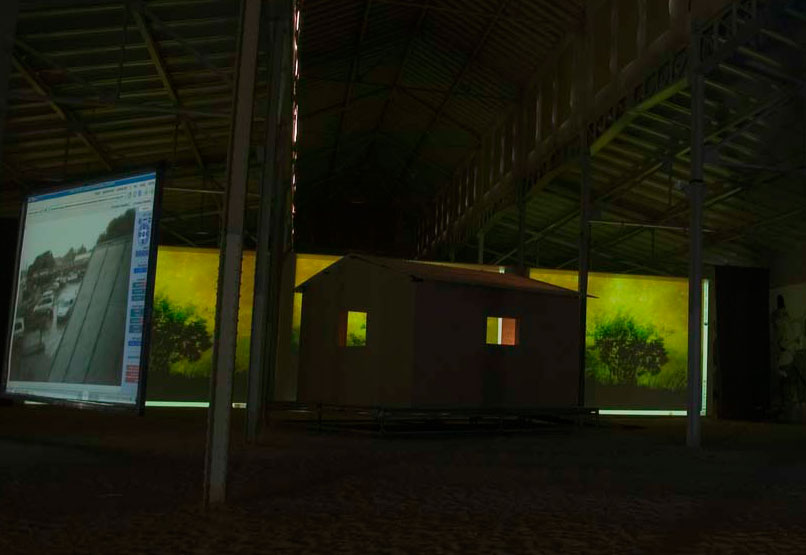 Arcades first appeared in Paris in the first third of the nineteenth century and became increasingly commonplace, as Walter Benjamin points out, with the growth of the textile trade, which marked the beginning of a hitherto unknown relationship between the inhabitant as a customer/buyer (user) and the city. Glass, iron, overhead light and artificial lighting -“The arcades were the setting for the first gas lighting,”‘ wrote Benjamin- covered entire blocks of buildings. This new architectural concept was in keeping with the period of change and the industrial revolution it formed part of. However, it also represented the ubiquity of a city inside a larger city, a clear attempt to create a “new” world inside a known one, while evoking the ideals of progress and well-being, albeit founded on a virtual idea, unreal or unattainable, that the physical and tangible world no longer seemed capable of generating or achieving.
In much the same way as painting, panoramic views faithfully reflect nature, but, in extending further than painting, they convert it into a lifelike experience thanks to the lighting, generating transitions of light that imitate day and night using effects normally associated with illusionism. In employing features that belong to the scenic arts, panoramic views represent at the same time the prelude to “”photography, silent film and sound film”2. These modes of recording a world in constant flux (modes engaged in an almost constant transition and interrelated with each other), became gradually more feasible when technological advances made it possible to convert into scientific practice the theory that enabled the albeit problematic use of the magic lantern. As a result of one of these transitions, Daguerre, after losing his most developed panoramic views in a fire in 1839, unveiled his daguerreotype, an improved appropriation of the methods of Nicéphore Niépce (above all in relation to the medium and the fixing of the image), something that gave him a disproportionate amount of fame as a pioneer and a consummate illusionist. In other words, if the panoramic views can be viewed as the extension of painting within the ambit of the scenic arts, the appearance of photography momentarily and fragmentarily fixes part of that mystery played out in the settings. If lighting bestows credibility and verisimilitude upon large panoramic settings, then light is the essential material that enables the photographic act to take place, allowing both the photograph to be taken and the resulting image to emerge on a sensitised glass plate.
By following the relevant thread, we can interpret the shop windows of the arcades as screens onto which products are projected, visible behind the transparency of the glass and inaccessible due to the pure thickness of its surface. They drive a desire that is only satisfied by the action of buying and selling. In the objects displayed in them we not only see the goods that we wish to purchase, we also project ourselves into a mental space where we ‘are wearing the clothes, eating the food, using the utensils or living with the furniture put in front of us. This projection operates, at the very least, in two directions. In seeing ourselves within this imaginary world, we plan the future from the present, we create a line of action, we want to see that this journey we are embarking on is feasible. On the other hand, we project an illusory reflection of ourselves, an idyllic image in which the future we imagine does not exist, and in which we would be incapable of handling it with complete freedom should we find ourselves in it. The truth is, we cannot control something that is shown to be intangible and which is also, to all intents and purposes, impossible to predict.

All that remains is to look carefully, put the pieces together again and form a stance of one’s own from which to question, yet again, our entire surroundings.

Daniel G. Andújar, the artist as a thinker and augur of what happens