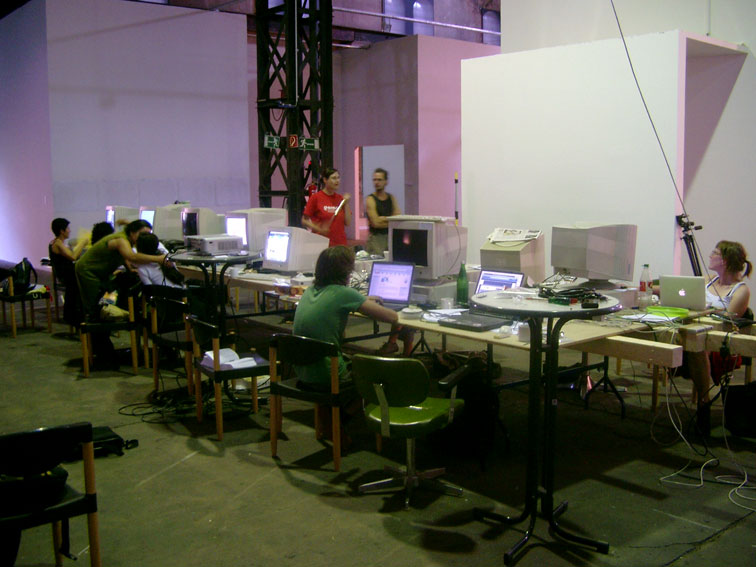 “Heimatwechsel” is an interdisciplinary 4-week workshop for students specialising in the areas of design, visual communication, art, media and culture sciences. The tutors of the workshop are three internationally renowned artists from the USA, Spain and Germany: Antoni Muntadas, Daniel García Andújar and Bettina Lockemann.

The aim of the workshop is to facilitate reflection upon the structures of the “public” process, the methods of communication and the possibilities these present and to intervene artistically using modern communication technology methods and to test new “public” participation models.

Within the four weeks of workshop, forms of creative, critical and subversive handling of media and new technologies in both theory and in practice shall be developed. Focus of the workshop is thereby additionally the specific urbane and social situation in Dortmund Hörde regarding the developments planned at present at the locations Hörde, Phoenix West and Phoenix Ost. The project offers beyond that the opportunity to examine strategies of “art in public space” – a public space which has long been influenced by the mass media as well as by new information and communications technology (Internet, mobile telephone, wireless LAN).

The central location of the workshops will be the former spare parts stores at the disused Phoenix West steel works, which was shut down in 1998. The, in the meantime, renamed “Phoenix Halle” exhibition and events hall is situated in one of the “future locations” of Dortmund, which will become the location of ICT business in the next few years – or like the eastern part of the steel works “Phoenix east” – will be converted into high-quality residential quarters.

In the middle of the two areas lies the centre of the suburb Hörde, which played neither a roll in the planning to date, nor can it participate in any way in the radical restructuring of the former industrial location.

The location – the Phoenix Halle – offers the workshop a concrete example to reflect on the extremely varied communication technologies and their functions within the context of this radical, local “Heimatwechsel”.

Antoni Muntadas (New York) is one of the main artists, who has been experimenting with critical media practice within constantly changing contexts (public space, television, internet etc.) since the late 1960’s. He was represented at the documenta 5 and X and at various biennial art festivals.
In the workshop he will reflect on basic, methodical and theoretical ways of tackling an interventionist practice of art with the students of the workshops and will discuss optional interaction between theory, practice and actual implementation.

Daniel García Andújar (Valencia) is an artist, who has used the Internet in an interventional and de/constructive way as a tool for critically viewing media since the middle of the 1990’s. He is a fellow initiator of irational.org, took part among other things, in the exhibition net.conditions (ZKM, centre for art and media technology). In 2002 with the project “e-valencia“ he put into action the idea of a networked local communication structure, which successfully brought together divergent interest groups concerned with a critical discussion of cultural political developments.
In the context of the workshops, he will develop further the ideas, which were generated by the students in the first part of the workshop. Thereby the main emphasis will be concerned with the implementation of free communication “tools”: how to reach which target groups, either through participation or reception, which infra-structure and what technology is necessary for this.

Bettina Lockemann (Köln) is a media artist (photography, video, Internet), designer and media theorist. Among other things she took part in the research project of the Staatlichen Akademie der Bildenden Künste (State Academy for Creative Arts), Stuttgart for “Visuellen Kompetenz im Medienzeitalter“ (visual competence in the media era). In her extensive exhibitions she combines the theoretical side of creative strategies with the actual, artistic conversion into practice.
Bettina Lockemann will actively accompany the first two parts of the workshop. The emphasis in the third part will be on the implementation of individual plans and their adequate documentation, visualisation and communication.

Part 4 Presentation: September 2004 (at different venues)
No exhibition is planned as such. The emphasis will be on the documentation of planning concepts or the consolidation of infrastructural proposals for those taking part in the workshop and/or from population groups involved in the projects. The aim of the presentation is more to let “news” of the workshop results “seep” through to the public than to present it publicly. Here the actual public space, the internet or the still very effective print media can play a roll.

The 4-week interdisciplinary workshop is aimed at those students whose main area of study encompasses visual communication, media art, film/video, media and cultural science, and design.

The Workshop will be held in English.
The number of participants is limited to 15 students.

Please, send your applications including CV and a short description why you would like to participate to: