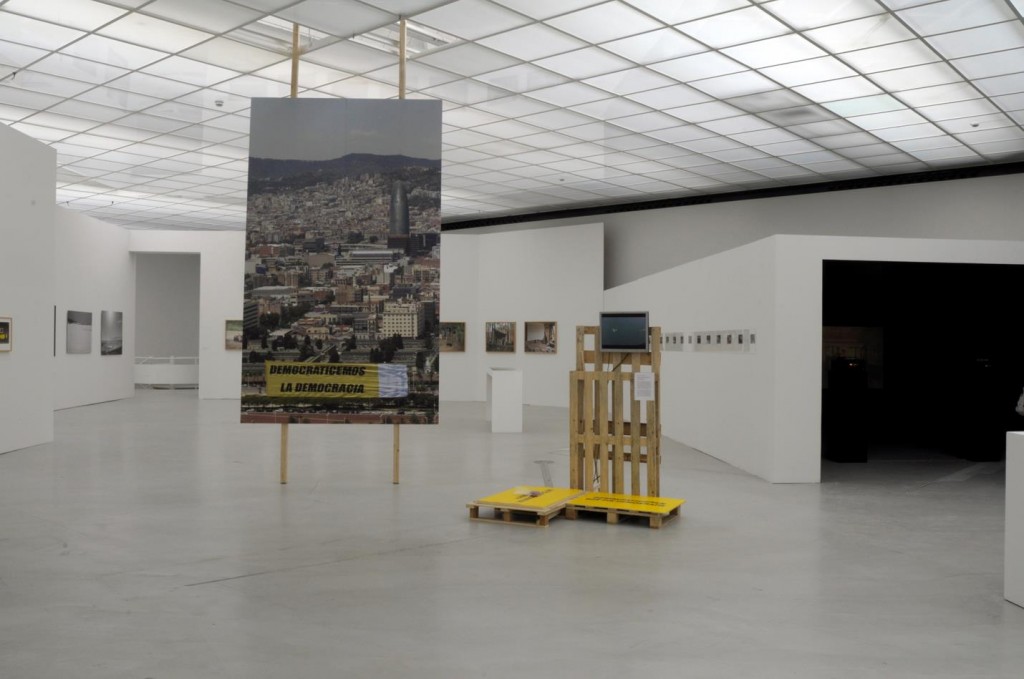 From May 17 to July 29, 2012 the Württembergischer Kunstverein will be showing Oh, My Complex: On Unease at Beholding the City, an exhibition that approaches the imaginaries, representations, and realities of the city from different directions: from the angle of architectural and urban constructions of the nineteen-thirties through today; from Europe, the USA, South America, and Asia; from the perspectives of art, exhibition, pop, and protest cultures starting from the seventies.

Along an open parcourse, which connects exterior and interior space, the exhibition presents the works of over twenty artists who have honed in on the urban-development, social, political, and economic lines of conflict within the city. Their works touch upon historical documents and objects from pop- and sub-culture contexts. Presented are not only existing works, but also those conceptualized especially for this setting.

The exhibition is focused on works that trace the ideological entrenchment of urban visions; that is to say, the visions manifesting in modernist urban utopias, in the models of the neoliberal boomtown, but also in those scenarios of crisis that have been inhabiting our collective imaginary worlds since the nineteen-seventies—not least since the bestseller The Limits to Growth (1972) by Dennis Meadows was published.

Likewise explored is that which is visible within or hiding behind this imaginary: especially in view of the contrasting issues being played out amidst urban planning, architecture, politics, economy, city residents, and city users.

The works of the artists involved—which range from gouaches, silhouettes, photo series, video clips, and multimedia installations to urban interventions—explore both imaginarily constructed and concretely built city space. In exaggerating and thwarting the power structures of modernist and postmodernist planning, they fathom those visions of architecture that are meant to bring forth a new kind of person, as well as the contested spaces of neoliberal (urban) politics.

The historical contexts addressed in the exhibition, spanning from the nineteen-thirties to the present day, are not negotiated in the form of a chronologically organized spatial setting, but rather from the perspective of the featured contemporary artistic appropriations. These works, in turn, enter into dialogue with elements culled from a comprehensive archive of image, literary, and film material, and also with articulations from pop- and sub-culture, including diverse music clips or even a video, anonymously published on YouTtube, documenting a breakneck mountain-bike rally straight on through a favela.

What is more, the show takes recourse to two historical exhibitions or exhibition displays that could not be more different in terms of their contexts and motifs. On the one hand, there is the reconstruction of the legendary exhibition Über die moderne Art zu leben (On the Modern Way of Living) analyzing contemporary issues, which Michael Fehr realized at the Museum Bochum in 1977 in collaboration with Diethelm Koch. On the other, there is Martin Eberle’s photo documentation of fifty panels from the state architecture academy in Pyongyang that gather together countless icons of world architecture, from the druid stones to the Guggenheim Museum in New York—icons that, in the spirit of socialism, purportedly served as fundus and template for the architectural design of the North Korean capital.

A further spatial and contextual shift is experienced by Ludger Gerdes’s neon artwork Angst (Fear), which he developed in 1989 for the town hall façade in the City of Marl, a structure erected wholly in the tradition of Brutalist architecture, and which will now temporarily reside at the Kunstverein facade. The work is comprised of the italicized yellow word “Angst” framed by two pictograms: a red golfer and a blue church.

Also counting among the exterior works in this exhibition is a project by Stuttgart artist Pablo Wendel that takes the form of a walk-in sculpture constructed of recycled materials. The work functions as platform for events and also as a guerilla-tactical project intended to facilitate a redistribution of energy.

The exhibition title has been borrowed from a video performance by South Korean artist Lim Minouk. Here, a camera pursues a singer who, in the company of a drummer, is riding in a pickup truck through various districts of Seoul while bellowing, in punk style, at this city that has been so strongly influenced by Asian turbo-capitalism.

Embodied in this image—portraying a personage laying claim to space and making herself heard against all odds—is essentially the conflict around which the exhibition Oh, My Complex revolves: the controversy about the production, distribution, and utilization of space—and all of the contradictions that go hand in hand with this struggle.