MORE MILK YVETTE
A Journal of the Broken Screen 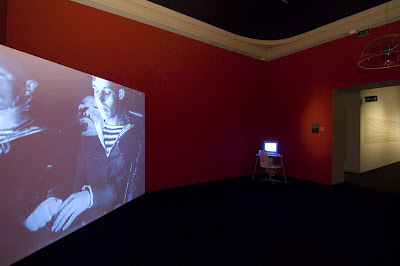 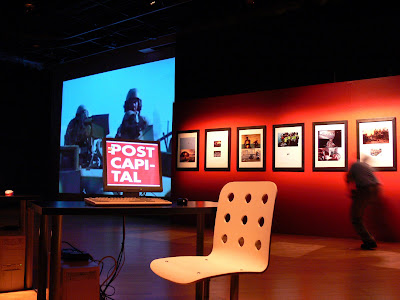 The images throughout this piece are press images for Postcapital. Archive 1989 – 2001, an art project by Daniel García Andújar / Technologies To The People (Nov 22, 2008 – Jan 18, 2009) at the Württembergischer Kunstverein Stuttgart.

I’m puzzled by them, not so much because of their form, which reflects several ever present contemporary concerns: an interest in archives and the use of the gallery as a designed environment for perusal of the archive. No, what puzzles me about these images is something more specific about the kind of encounter they invite.

They highlight two contrasting kinds of space: the space of the gallery and the space of the images themselves. One is ordered, clean and clear,  and at its best-worst can suggest the gallery as a kind of less crowded Apple Store. Within its comforts, on its tidy screens, the theoretical ideal is that we can look at all kinds of images, ranging freely across genocide, war, pornography, current affairs, leisure activities, anything at all, reassured  and supported by the gallery setting…

Actually, the remit of Postcapital is defined, having identified its very own historical period (1989-2001)  that its images attempt to bring to summation. It’s an interesting idea, and one evidently seeking to rehabilitate a term: google Postcapital at the moment and it is mainly the preserve of private investment and equity firms. 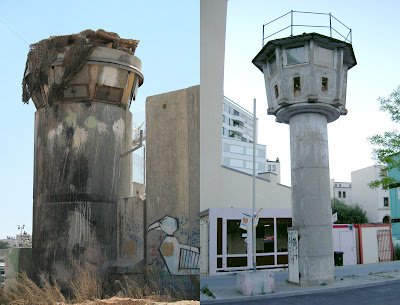 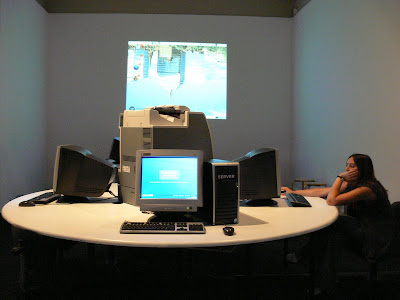 But prompted by the two images above: what really are we supposed to do in a gallery with all this material? What relationship to it are we supposed to have? What are we supposed to do? My own rather vague and random exhibition behaviour make me resistant to any overly structured idea of critical thinking, space for reflection, or individual forms of research. The image above suggests some sense of parody has entered, consciously or unconsciously, into Postcapital. At least, I hope so.

García Andújar’s double images (see below) are relevant here, because they point to an uncomfortable interzone rather than a distinction between separate categories of material. I wonder how such contaminations – I’m not at all sure that’s the right word but it does suggest the (hypothetical) viral intensity that can hold together archives of this kind- could be extended to the exhibition as a whole. 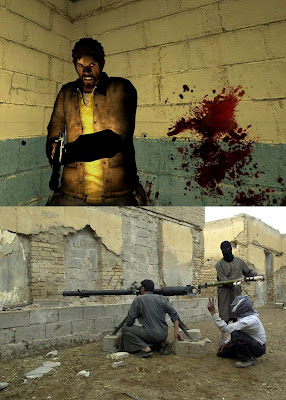 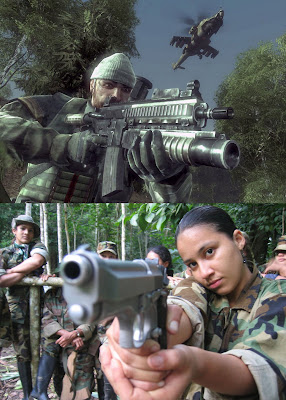 I found a rudimentary outline of the kind of exhibition space I’m trying to suggest in Brandon La Belle’s  new essay Genet on Holiday, or proposals for a dirty ear where he writes:

Hiding, going undercover, ducking the spotlight, on the move, behind the lines or out of bounds, in the cracks, skirting the issue, out of sight, beyond the pale, out of earshot, past the divide, covert or masked, slippery or slick, – mr slick, ice cold or slimy and slithery… – he remains hard to know, difficult to gauge, unknown to most of us, but somehow always present: surprised by his actions, who is he anyway? What is the point, where is the origin, who knows the secret, the original mark of difference and identity, so as to know to affirm to name to underscore the line of thinking, the directive, the language around which all words and actions circulate? Lost or losing the way, turning surface into a game, words into theatre, self into trickster – I twist the map into a ball, crumple it up and toss it into the street where the wind carries it…

Jean Genet leaves the house to roam the countryside, picking up hustlers and sailors along the way, himself a child a thief a poet a lover all intertwined into the formation of a different kind of dance; he aims to remain on the edge of the language that keeps sex and criminality on either side, love and politics divided, poetry and friendship at odds… I linger over Genet because he shows the way through the twisted roads of the body and the law, where presence is always already more than itself, and wedged into the economy of desire dictated by the markings of the social; misfit derelict hustler fag romantic outcast ragpicker fuck-up loser – the pirate nation comes to haunt the castle by revealing, through a surreptitious counteraction, what is always already housed within.

Yet what Genet uncovers is the means to withstand the very promise of opposition – his is a meandering antagonism, a horizon masking the view with an uncertain presence, one that camouflages the scene with its own inherent patterning, a kind of overwriting to a point of pleasure and honesty, reporting or tracing while pricking the skin. (17) 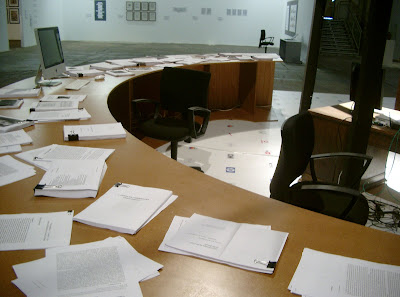 AND THE VOICE SAID: Be wary of your own proposals. They could produce some truly terrible exhibitions. Note, too, how in some of the photographs above both a person and a bulldog clip can be used to give a sense of human scale. That’s not good.

Using La Belle’s essay here is a further adaption of its own strategy of inventing Genet as an inspiration for sound art.  It helps point towards an engagement with the art-archive that can encourage ruptures of feeling and relationship into its smooth, slick veneer. These ruptures may be felt by the gallery viewer or be qualities of the images themselves.  Sometimes I think a mix of parody and radical pedagogy is the way to go, but other times this does not seem possible. 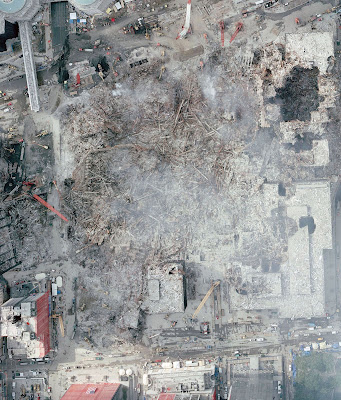 Daniel G. Andújar, the artist as a thinker and augur of what happens