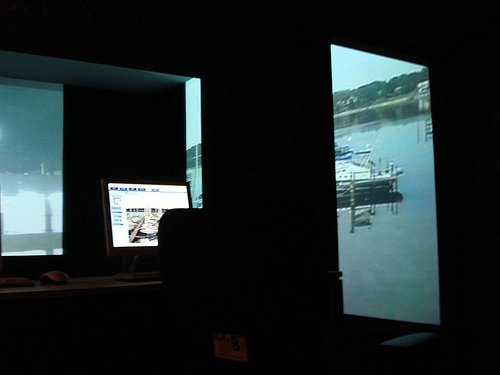 The perceptual re-construction of space is a continuous process, generated by diverse inputs such as our senses, memory, history, consciousness as well as technology. It is a process, consisting of momentary fragments, which are impossible to record. They are temporary, augmented, designed, and loaded.

“Unrecorded” exhibition looks at the notion of space as a decisive factor in our perception of the realities that surround us. The works of Kati London (US), Thomas Duc (France), Laila El-Haddad (Palestine), Dan Phiffer (US), Mushon Zer-Aviv (Israel), Daniel Garcia Andujar (Spain), Zhou Hongxiang (China), Banu Cennetoglu (Turkey), Negar Tahsili (Iran), Kate Armstrong (Canada), and Ali Taptik (Turkey) unfold and restructure all possible perceptual codes through their own inspections, observations, and approaches. They ask questions about the physicality of the space; content of mediatized spaces; clashes between realities and perception of spaces; spaces and situations, discharging information; and narrative spaces.

Exhibition space is deliberately designed to minimize the interaction between the data input of physical space and the audio-visual senses of the viewer, in order to drive the viewer into the realm of each work. Thus, each and every work leads to another, through a unique navigation established by each viewer. In this respect, works in the exhibition are re-positioned, re-linked in space-time relative to the “reading” done by each viewer, building alternative paths. Inevitably, the exhibition takes the phases of informational capitalism, global scenarios for socio-political, cultural and economic gaps into consideration, on each and every visit.

The exhibition will be accompanied by a series of lectures and workshops developed by a group of artists, writers, curators and theorists including Jalal Toufic (LB), Nat Muller (NL), Technologies To The People (Daniel G. Andujar) (ES), Laila El-Haddad (PS), Dan Phiffer (US), and Mushon Zer-Aviv (IL).

6 March 2008
A presentation and talk by Laila El-Haddad (Palestine), Dan Phiffer (US) and Mushon Zer-Aviv (Israel)

You Are Not Here

13-14-15 March 2008
A 3 days practical and theoretical workshop/meeting by Technologies To The People. Directed by Daniel G. Andújar (Spain)

You Said “Stay,” So I Stayed

2008, Basak Senova, Do It Together, Exhibition, HackLandscape, Istanbul, Technologies To The People, Unrecorded