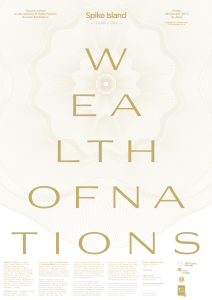 The term "Wealth of Nations" is the title of the seminal book by the Scottish economist Adam Smith, in which he establishes and defends the basics of Liberal Economic Policy. Liberal Economics experienced its peak in the 1990s after the concept of Real Socialism had failed and the global free market had been established. This economy, however, has entered a period of deep crisis in past years and it affects the stability of societies. This syntax Wealth of Nations is used, on the one hand, as a theme for today’s state of liberal economy and, on the other hand, raises serious questions: What really constitutes value? Is it social interaction, beliefs and fears along with market indexes? To what extent is money nature or culture? Is money the equivalent of goods, labour, or is it self-referential? In this group exhibition of international artists and art collectives the notions of (material and immaterial) value, money and debt within today's society, as well as social practices reaching for alternative models of economy are explored.
Continue Reading
admin
Srpski
2009, Exhibition, Gordana Nikolić, iSam, Kristian Lukić, Novi Sad, reviews about Daniel G. Andújar, Street Access Machine, Technologies To The People, Vladan Joler

Wealth of Nations is a part of the Cinema City festival and consists of an exhibition and a conference. The term ‘Wealth of Nations’ is the title of the seminal book by the Scottish economist Adam Smith, in which he establishes and defends the basics of Liberal Economic Policy. Liberal Economics experienced its peak in the 1990s after the concept of Real Socialism had failed and the global free market had been established. This economy, however, has entered a period of deep crisis in the past few months and it might, for a shorter or longer period, affect the stability of societies all over the planet. The topic of ‘Wealth of Nations’ this year will delve into the influences that the Economic and Financial sectors have on society and consequently, on cultural production.

The aim of both the exhibition and the conference ‘Wealth of Nations’ is to bring together Art, Theory, Social Sciences and Economics, Cultural Studies and Finance in order to discuss the phenomenon of money within different social and historical contexts and meanings. According to its definition money is : a) a measure of value b) a medium of exchange and c) a medium of capital accumulation. The fact is that money is never solely money as a measure of economic value. It is a measure of value that participates in the constitution, and the control and regulation of both the material and nonmaterial (irrational or imaginary) social body/subject and its relations. From such a position, money can be viewed as the basis of social power, as the main element or measure of value, or as a symbolic or numerical abstraction.
Continue Reading
admin
Español
1996, 2006, Buenos Aires, Gustavo Romano, Media Art, net.art, Simulation, Street Access Machine 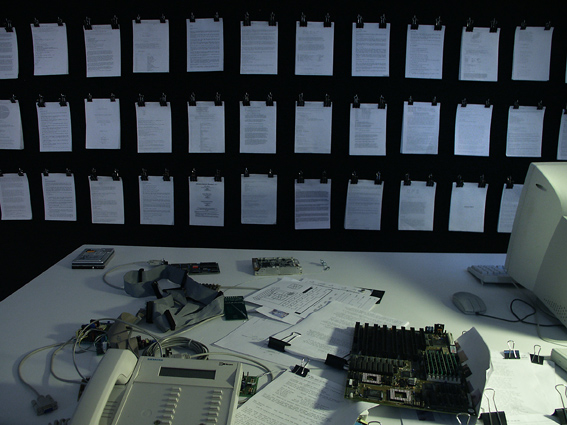 Technologies to the People® – Our Sponsor, or: How we got the attention of both Apple™ and the left German art critique

„I am not fond of manipulation, and I think you should not use it for political aims." (1) (Left-wing squatter in Berlin, April 2000) In 1996-1997 together with Ute Vorkoeper we organized and curated the international exhibition project discord. sabotage of realities (2) which took place in the Kunstverein and the Kunsthaus in Hamburg. The exhibition was part of the Hamburg Week of Visual Arts 1996, partly funded by the city's Cultural Office. Artists worldwide were invited to submit artistic concepts dealing with today's more and more un-peaceful political and social realities. The organizers received more than 500 concepts from 31 countries. The actual exibition discord was divided into six thematic zones focussing on control (security/insecurity), news services (disinformation), everyday (alienation), border politics (walking the tightrope), state machineries (law, discipline, repression), science fiction & economy (the administration of the future) and included an international selection of 34 artistic works most of which were premiered in the exhibition, and 26 additional artistic concepts from 18 countries. 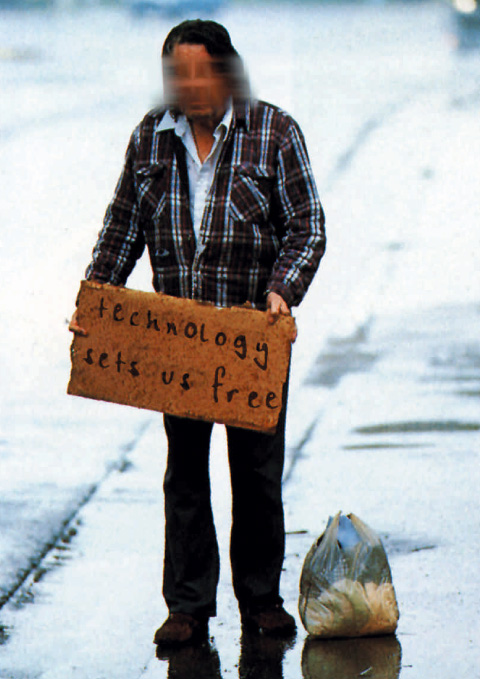 by Iris Dressler, «Technologies To The People» In 1996, Daniel García Andújar founded the concern «Technologies To The People,» which brought the «Street Access Machine» on the market the same year: a combination system made up of reading device, special credit card, and public online access, which allows the homeless and other fringe groups to enter the world of plastic money and E-commerce. The trademark-protected «Street Access Machine,» whose design announced the i-Mac Generation in 1996, is perfectly marketed with a corporate identity and comprehensive advertising campaign—flyers, posters, and merchandising materials. Nothing is missing except the corresponding product. Andújar is not concerned with virtual capital for all, but more so with naming the structures of exclusion so gladly denied during the course of the omnipresent cyber-euphoria.[...]

1996 Website, printed flyers, posters « [www.irational.org/tttp/*siteTTTP/] Presented with original posters » Products offered by Technologies To The People (TTTP), the company founded by Daniel G. Andújar, range from the Street Access Machine® over the Recovery Card® and Internet Street Access Machine® to the Personal Folkcomputer®. All of these (fictitious) products and technologies aim to allow the socially underprivileged to participate in the emergent information society. While the Internet Street Access Machine® promises »access for all«, the Street Access Machine® and Recovery Card® enables beggars to accept payment by credit card. The project unmasks the belief, propagated by those who manufacture the associated products (and by »Californian ideology«*), that a democratizing potential is inherent to technology. The world shown by TTTP on its posters and leaflets is neither more just thanks to the deployment of these new technologies, nor is it accessible to all — despite the claims made by providers of telecommunications applications. Even if they use the latest info-society tools, beggars remain beggars, the socially marginalized remain socially marginalized. Technologies tend to reinforce, rather than alter, social structures. When the project was presented in Hamburg in 1996, a (bona fide) mail was received from Apple, announcing the company’s interest in