Post_Cyber-Communism and the Holes in the Pavement (v0.2.0.1)

EXTRACTS from the READER 01 Postcapital Archive 1989–2001 Orton Akıncı Daniel García Andújar describes the condition and the period after the “fall of the Berlin Wall” as an aspect of post-capitalism, rather than of post-communism. That condition, the period covered in Andújar’s project “Postcapital. Archive 1989-2001” also features the advance in information technologies and the phenomenon of the Internet. When the students began ripping of the paving stones to throw them to the police during the events of May 1968 in Paris, they realized the yellow sand underneath the paving stones; the cobblestones. And when they also turned on the water pumps, the sand got wet. Yes, this was the “beach”. The beach of freedom, covered up by the pavement of the modern civilization of property and control. The “beach” was the “another world”, ”under the paving stones”. In his 1998 essay “Cyber-communism”, Richard Barbrook stated “the Americans are superseding capitalism in cyberspace”. This was also the time Andújar describes as an aspect of post-capitalism. According to Barbrook, the Americans were having a different experience than that of capitalism in their daily Internet practice. This experience, which he relates to that of communism, was a consequence, an aspect of capitalism. According to Barbrook, it was capitalism itself which made the “digerati” a powerful class with high salaries, and it was the digerati who developed the information technologies, the Internet and the idea of free/open source software, as well as many other possibilities that enabled the individuals to “supersede” capitalism in “cyberspace”. Just like the scenario Karl Marx proposed for the end of the capitalism: "At a certain stage of development, the material productive forces of society come into conflict with the existing relations of production or -- this merely expresses the same thing in legal terms -- with the property relations within the framework of which they have operated hitherto. From forms of development of the productive forces these relations turn into their fetters. Then begins an era of social revolution. The changes in the economic foundation lead sooner or later to the transformation of the whole immense superstructure."

EXTRACTS from the READER 01 Postcapital Archive 1989–2001 Özgür Uçkan 1989, the fall of the Berlin Wall and 2001, September 11... These watershed Daniel G. Andújar chooses for his network-based archive-process installation signify a paradigm shift: the paradigm shift from scale economies to capacity economies, industrial production to flexible network production, physical power to knowledge power, the nation state to transnational Empire, a unipolar world to a multipolar one, de-centralized and distributed all-encompassing net-world: This is a paradigm coined by the most recent global crisis: Global Network Capitalism... Andújar’s choice of dates also heralds what’s beyond this paradigm. The fall of both the Wall and the Twin Towers indicate there is an “after” to capitalism. This potential future ironically feeds off the “network” concept. Because at its core, the concept of “network capitalism” embodies an antagonistic dichotomy. The network topology undermines the foundations of capitalism. The process of capitalist accumulation and profit now depends upon co-operations established online, collaborative intangible labor, innovation networks, and the development of knowledge production, access, dissemination, that is to say the process of creating surplus value through open, continuous, horizontally coordinated networks. Network means co-operation and sharing, whereas capitalism is the product of an instrumental reason dominated by competition.

On Archives and Networks

EXTRACTS from the READER 01 Postcapital. Archive 1989–2001 Basak Senova Turkey has been going through incredibly rapid and immense social, political, and cultural changes since the shift to neo-liberal economy in the beginning of the 80’s. While we have been simply going through these changes, we have neither been able to record them nor have been aware of their speed. Our lives have been transformed. To slow down the pace of these changes and to visualize such a data would enable us to understand and to confront the details that lie behind the reasons for these changes and their effects on us. Today, media collects and distributes images for us with immense speed and magnitude. We are surrounded by these images; and more than ever, all communication technologies -as efficient apparatus of late capitalism- infuse our lives with vast attacks of images. Nevertheless, we have also learned from the same sources that the meaning of any image is dependent upon the context. It is not only the images, but also the ideologies and realities behind the images that are being created for us. In this respect, “Postcapital” archive developed by Daniel García Andújar ironically shoots back with the same gun by detecting lapses in our perception and explanation of political, cultural, economic, social, and even technological conditions and realities. He indexes our cognitive mechanisms. Andújar's project strives to make sensible connections between mediated images of an immense and chaotic pile. His intention is building a system that helps the viewer/user to correlate incidents of certain periods from different time slates of a decade via multidirectional links. 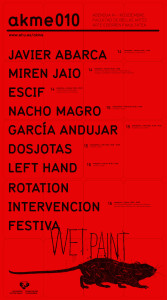 November 28, 2010 – January 9, 2011 An exhibition by Württembergischer Kunstverein Stuttgart In conjunction with Re-Designing the East. Political Design in Asia und Europe / In Charge. The Role of Political Designers in Transformation Idea und conception Hans D. Christ, Yvonne P. Doderer, Iris Dressler, Stephan Köperl, Sylvia Winkler With contributions by NOH Suntag, Daniel García Andújar, Dan Perjovschi and others The exhibition The Art of Not Being Governed Like That, refering in its title to Michel Foucualt, is an independent project while simultaneously comprising part of the exhibition Re-Designing the East: Political Design in Asia and Europe.