FEEDFORWARD. THE ANGEL OF HISTORY

FEEDFORWARD – The Angel of History addresses the current moment in history where the wreckage of political conflict and economic inequality is piling up, while globalized forces—largely enabled by the “progress” of digital information technologies—inexorably feed us forward. The exhibition title references Paul Klee’s painting Angelus Novus, which Walter Benjamin famously interpreted as an “angel of history” transfixed by the wreckage of the past that is piling up in front of him while being propelled backwards into the uncertain future by a storm from paradise (progress).

The exhibition, curated by Steve Dietz (Artistic Director of the 01SJ Biennial) and Christiane Paul (Director of the Media Studies Graduate Program, New School, NY; Adjunct Curator of New Media Arts, Whitney Museum of American Art) features 29 artworks by 27 artists and artist teams. The projects are presented, as if in the rear view mirror of progress, in sections relating to five themes: the “wreckage” of the 20th century created by wars and conflict; the countermeasures of surveillance and repression that the state as well as global capital set up in an to attempt to maintain control; the aesthetics and symbolic language of the media of our times; the forces of economic globalization such as outsourcing and migration; and the possibilities of reconstruction and agency. 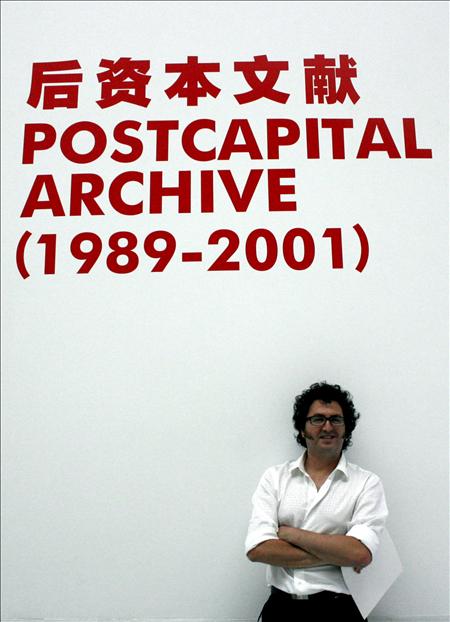 The project – lines of work

Despite being presented as a unitary project, La comunitat inconfessable has three different lines of action:

1. An exhibition presenting the ideas generated by each of the participants (Sitesize/Joan Vila-Puig and Elvira Pujol, Technolo­gies To The People/Daniel G. Andújar and Archivo F.X./Pedro G. Romero) using the metaphor of a library as a reference point or visual interface. Thus, each intervention constitutes a “deconstructed” approach -i.e., distorted, unconstructed, destroyed or under construction- to this space of knowledge, learning and theatricality that is Borges’ interminable library, which functions here as a sort of meeting point of the “community of readers” urged by Blanchot.

2. A book constituting a kind of polyphony of essays using texts by Maurice Blanchot, Giorgio Agamben, Jean Luc Nancy, Philippe Lacoue-Labarthe, Lars Iyer, Peter Pál Pelbart and Marina Garcés that were published in different contexts, periods and media, but which, never the less, pose shared questions such as: What is the common? In which political or mental space is the notion of community developed? With which elements is it confronted? On which does it feed?

Interrupting this speculative drift around the question about the communal, there appear three insertions by each of the participants in the project – Sitesize, Technologies To The People and Archivo F.X. These insertion points include a written presentation of their respective artistic ideas, a visual work specifically conceived for the book, linked to the themes presented in museographic format, and a conversation between each artist and various philosophers, anthropologists, historians, geographers and curators (Gerard Horta, Francesc Muñoz, Eduard Masjuan, Iris Dressler, Jacob Lillemose, the Todoazen collective, Juan José Lahuerta and Manuel Delgado) with whom they share the same ideological and conceptual concerns.

3. La comunitat inconfessable project is completed by a website that will document it visually and textually, and operate as a vast archival collection around the notion of the communal from the perspective of philosophy, anthropology, the social sciences and art, among other disciplines.

The Postcapital Archive(1989-2001), www.postcapital.org, was presented for the first time in 2006 at the La Virreina Centre de la Imatge in Barcelona as part of the Postcapital. Politics, the city, money project, together with the work of artist Carlos Garaicoa and essayist Iván de la Nuez. Since then this multimedia proposal in process—that not only allows user consultations but also copying and even modification—has gone on expanding in successive exhibitions, workshops and interventions in public space carried out in Oslo, Santiago de Chile, Bremen, Montreal, Istanbul, Dortmund and, more recently, at the Württembergischer Kunstvereinin Stuttgart as an anthology.

In its current configuration, the archive contains more than 250,000 documents compiled from the Internet by Daniel G. Andújar over nearly a decade of creative work. These materials, among which publications, video and audio clips and image banks are to be found, sketch out a vast examination of the geopolitical transformations and the state of the communist and capitalist ideologies in the period spanning from the fall of the Berlin Wall to the attack on the Twin Towers in New York.