DYSTOPIA + IDENTITY IN THE AGE OF GLOBAL COMMUNICATIONS

DYSTOPIA. CURATED BY CRISTINE WANG (CURATOR, NEW MEDIA ARTS) MACHINES WILL LEAD TO A NEW ORDER BOTH OF WORK AND OF LEISURE" [Le Corbusier, Vers une Architecture (1923)] Artists at the beginning of the 20th century sought towork in hybrid forms, as a socially-oriented movement, anutopian vision which embodied the idealism of a neworder, believing itself capable of changing, reforming,reordering--totally changing all aspects of human life.They embraced the notion of the all-encompassing role ofart: the profound belief in the ability of art to effectchange. Almost one hundred years later, into the new millenium,we have seen the effects of this utopian vision: thefailure of modernism and its various permutations on aglobal basis.

Technologies to the People® – Our Sponsor, or: How we got the attention of both Apple™ and the left German art critique

„I am not fond of manipulation, and I think you should not use it for political aims." (1) (Left-wing squatter in Berlin, April 2000) In 1996-1997 together with Ute Vorkoeper we organized and curated the international exhibition project discord. sabotage of realities (2) which took place in the Kunstverein and the Kunsthaus in Hamburg. The exhibition was part of the Hamburg Week of Visual Arts 1996, partly funded by the city's Cultural Office. Artists worldwide were invited to submit artistic concepts dealing with today's more and more un-peaceful political and social realities. The organizers received more than 500 concepts from 31 countries. The actual exibition discord was divided into six thematic zones focussing on control (security/insecurity), news services (disinformation), everyday (alienation), border politics (walking the tightrope), state machineries (law, discipline, repression), science fiction & economy (the administration of the future) and included an international selection of 34 artistic works most of which were premiered in the exhibition, and 26 additional artistic concepts from 18 countries. 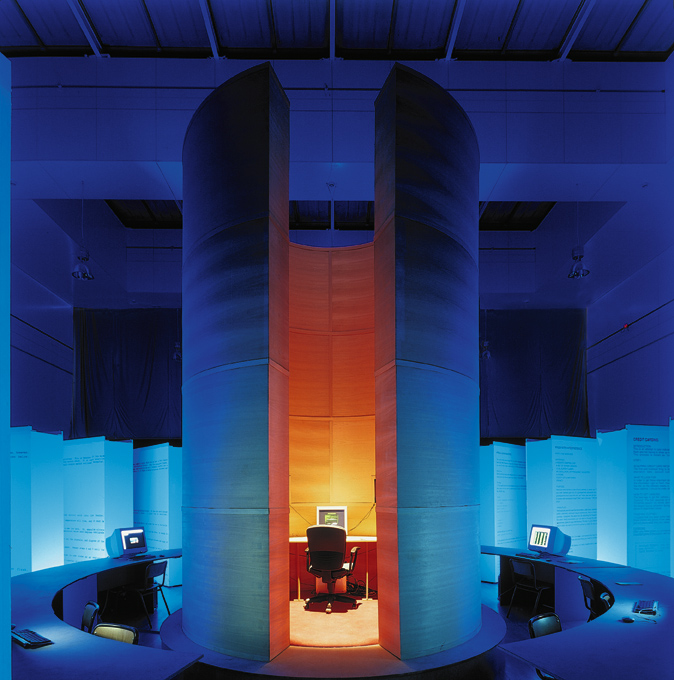 OSLO PRESENCE , a presentation weekend and workshop at Atelier Nord, Oslo, Norway by Kristin Bergaust Around 20 different projects that combined new media art, social and political awareness, were presented to the public in the premises of Atelier Nord media lab at the end of March 2000. The presentation weekend was also an introduction to the workshop that was held the following week. The weekend event was open to the public. Norway has been quite isolated from what has been going on in new media culture in other parts of Europe, and this was the first presentation of its kind in Oslo. The aim was to introduce media art concepts and practices to an audience of Norwegian artists and interested public. The event was also introducing ideas for the development of a Norwegian network of media-labs and other initiatives as well as developing further international networks and connections.