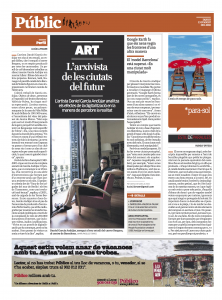 Corversation The Unavowable Community Iris Dressler: In one of our recent conversations, you described how the machinery of the bigger art institutions alienates the artists from their work to a certain extent. You put it more or less in the following way: the artist, arriving at the museum to install his or her works, is sent to luxury hotels, restaurants and bars, while an armada of professionals—technicians, restorers, architects, designers, coordinators, assistants and so forth—care for the ‘proper’ presentation and communication of his of her work, following the standards of the respective institution. This is not to mention that at this moment the curator and the PR and education departments have long since defined—again in line with the conventions of the respective house—the ways of mediating the artist’s works. The artist, finally arriving at the ‘ready-to-go’ exhibition, might be shocked, as he or she no longer recognises his or her work the way it is embodied in and absorbed by the corporate setting. But it is too late: the press, board, VIPs and the like are already standing by. These attitudes and workflows of the institutional machinery are of course not a new phenomenon if you just remember the cartoon-like diagram Average Day at the Museum by the MoMA from the 1940s. But it seems that until now museums in particular are largely ignoring over 40 years of ongoing and quite diverse practices as well as discourses of institutional critique. They instead basically submit themselves far too voluntarily to almost phantasmal political pressures regarding the museum’s city marketing and tourist impact, fixating on irrational growth in visitor numbers and pulling in lucrative and glamorous private corporations. In my view, these politically indoctrinated ‘missions’ of the museum (which go hand in hand with corporate demands) have nothing to do—as is often claimed—with the financial needs of museum maintenance. They are solely about putting the museum on a prestigious stage for business and politics. By this logic, the artist seems to be a sort of alien, a disruptive factor that needs to be sedated to fit in with the museum’s rhetoric. Daniel G. Andújar: Artistic practice, as I conceive it, must be transformed into a form of ‘resistance’ against a model obstinately aimed at prevailing in a space of relations that is becoming more and more confused, normalised, globalised, hierarchical, diffused, standardised and so on. Our society, economy and culture are founded upon interests, values, institutions, and systems of representation that, in general terms, limit creativity, confiscate and manipulate the artist’s work and divert his energy toward sterile confrontation and discouragement.

The following conversation is another way of presenting a few of the issues that this project wishes to analyse. It is a virtual dialogue-in-progress between Álvaro de los Ángeles and Daniel G. Andújar, written in the places and moments when it was possible to do so. Many of the ideas that were developed, however, were expressed when G. Andújar was in Valencia carrying out a workshop together with Rogelio López Cuenca. Themes such as the social commitment of contemporary artists, their roles within the socio-cultural and socio-political framework, the real possibilities and tactics of survival and the creation of new ways of understanding their trade in a society undergoing continual change, are side by side with elements which come from the very title of the project: What tools do artists today have at their disposal? Where or against what should the rereadings resulting from their actions be addressed? Álvaro de los Ángeles: The theoretical-practical workshop-encounter that you and Rogelio led from 3rd through 5th March 2008 served to define several of the central themes of the project Herramientas del arte. Relecturas [Tools of Art. Rereadings]. It’s true that not all of the concepts on the programme were able to be developed, in part because the entire process was condensed in three days, but, due to some of the aspects that were discussed there and the debate these created, the general impression after the workshop was that many questions were raised and new ways of facing the artistic experience emerged. From the very beginning, this project was planned to raise questions, to examine supposedly unquestionable facets of culture and its institutions, for all of the agents involved to consider which channels the artistic practices of today can be directed and to stir up a debate about the artist’s place in society. Also, if anything characterises art today, it is the hybridisation of techniques, media, the ways of exhibiting it and its relationship with other social subjects, such as politics, sociology, history, philosophy, psychoanalysis, architecture, or city planning… To which we could add other subjects, those not qualified as “scientific” but theorisable nonetheless, such as the question of memory, the archive as a model of contemporary society, the new interconnected social networks, the associationism and activism oriented towards art, or projected and created from it. Can the concept of art’s functionality, its usefulness within society (as it has been conceived since at least the 1930s and then its evolution in later decades) have a correlate in the contemporary art of today? Is a rereading of its functions and usefulness possible from the basis of the elements created by contemporary tools, especially those which have derived or emerged from technology? Is this the only way of re-reading its practice? And, as a consequence, in a society governed by macro-economics, where everything is valued in real time or even in advance, can art still have a real social function, in the feasible, palpable sense? Daniel G. Andújar: The practice of art, as I understand it, must also become a show of “resistance,” a model that obstinately wants to remain in a space of relationships which are more and more hierarchical, diffused, globalised, standardised… Those who direct the framework of cultural industries and the management of cultural institutions abandoned, decades ago, the processes of creating new contents and cultural production as a collective construction. Most of the professionals who run this framework are simply developing a personal power structure, climbing up the ladder to the most visible and media-friendly part of the public and private art institutions. They flaunt their power and reign over the reality of their little empire. The Art Institution has been absorbed as just another mechanism in the process of service production. It is an active part of the touristisation process in the urban context and participates in the complex re-adaptation of the new city’s infrastructures. Artists have been pushed out of the court to make way for a new elite of cultural managers who work in ivory towers, conceived more like mausoleums, on biennial events.