March 1 – April 5, 2014 Temp Art Space Opening Reception – Saturday March 1, 7 – 10pm 47 Walker Street, New York, NY 10013 Curated by Imma PrietoArtists: Daniel G. Andújar, Eugenio Ampudia, María Cañas, Mateo Maté, Chus García-Fraile, Jordi Colomer, PSJM, Avelino Sala, Marta de Gonzalo and Publio Pérez, Núria Güell, Jorge García, and Pelayo Varela TEMP Art Space and Spain Culture New York – Consulate General of Spain: Member of the Network Spain Arts &amp; Culture are pleased to announce Hic et Nunc, a curatorial project gathering a selection of artists whose works demonstrate how art stands as a symbolic act of resistance to the affronts that characterize our society. Hic et Nunc (Here and Now) is a proposal to look and see without complexes. Twelve audiovisual works respond to a cumulus of social inequalities and political humiliations, offering an open interpretation of politics that departs from the Aristotelian definition zoon politikon (political animal). This consideration, which examines the place of the citizen as an active participant. This idea implies the imperfect parts that constitute those in democracy, locating citizens in a space with no visibility. Neoliberalism, nationalism, state,  and economy are just some of the concepts that designate our present time. An enlightened absolutism with a numeric root, based on individual greed, has led and leads our future, from yesterday and today.

DYSTOPIA + IDENTITY IN THE AGE OF GLOBAL COMMUNICATIONS

DYSTOPIA. CURATED BY CRISTINE WANG (CURATOR, NEW MEDIA ARTS) MACHINES WILL LEAD TO A NEW ORDER BOTH OF WORK AND OF LEISURE" [Le Corbusier, Vers une Architecture (1923)] Artists at the beginning of the 20th century sought towork in hybrid forms, as a socially-oriented movement, anutopian vision which embodied the idealism of a neworder, believing itself capable of changing, reforming,reordering--totally changing all aspects of human life.They embraced the notion of the all-encompassing role ofart: the profound belief in the ability of art to effectchange. Almost one hundred years later, into the new millenium,we have seen the effects of this utopian vision: thefailure of modernism and its various permutations on aglobal basis. 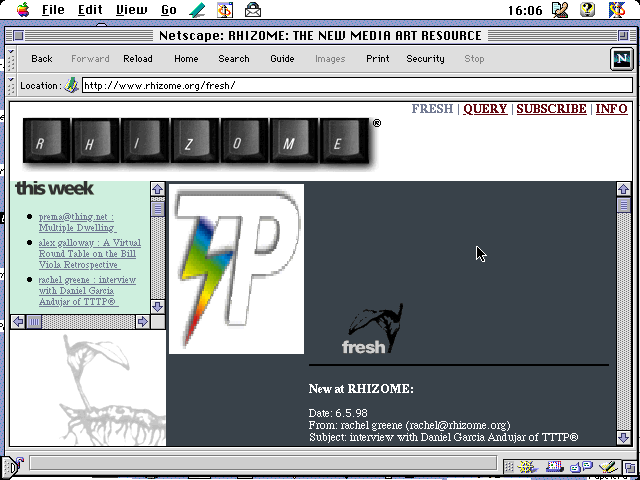 Rachel Greene Rhizome.org, NYC RHIZOME_RAW: interview with Daniel Garcia Andujar of TTTP® May 1998 Daniel Garcia Andujar an artist from Valencia, Spain. His current project is Technologies To the People®, though he has worked as an artist in other genres such as video, photography, urban intervention and installation. http://www.irational.org/daniel/ + + + RG: Explain Technologies To the People®. Why form an organization? DGA: I feel like right now there's a real fetishization of the new technologies, but I don't know about the kind of access people really have to them. There's the idea that this is a democratic space and every body comes here onto an equal playing field… I don't see it. I think that Technologies To the People® problematizes and widens the image of technological access, and questions and rethinks the related problems. It's a metaphor -- "all the people are connected" -- while also acting as a public provocation. Today, increasingly, to have access to information and resources, it's necessary to have connectivity. Who has real access to the technology? Will a new division be opened between "inforich" and "infopoor" people? How can we avoid this abyss of separation? Are we at the beginning to a new global colonization? How could it affect us in the future? What can we do to include more "classes of people" in the new information global infrastructure? These are issues that TTTP® tries to make obvious: virtuality, authenticity, copyright, sponsoring, media, power.